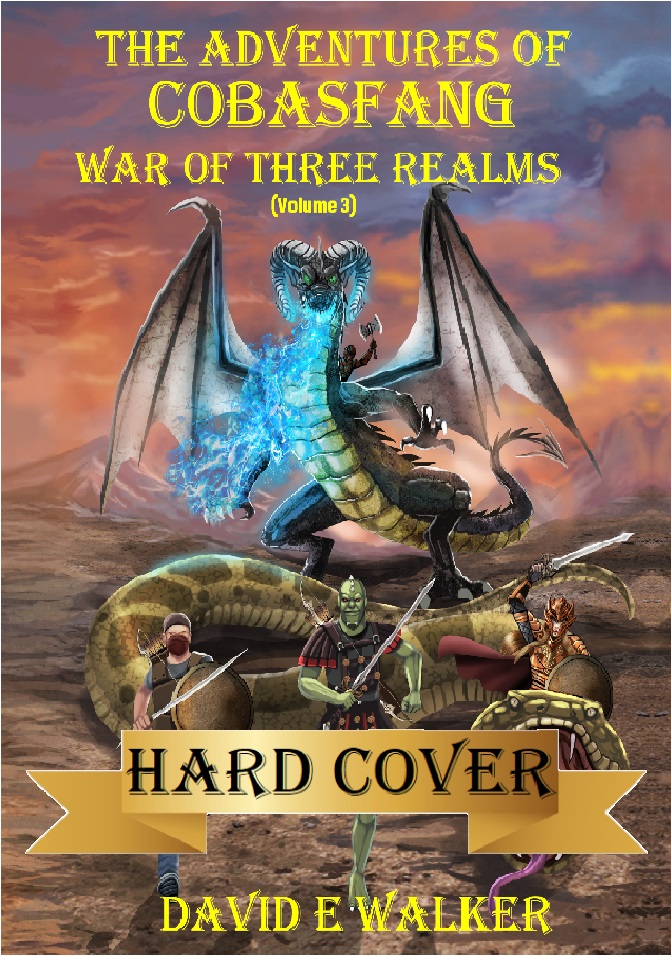 The Adventures of Cobasfang War of Three Realms (Hard Cover)

The Adventures of Cobasfang is an adventure story about one boy’s journey through the dangerous Shadow Forest. A place where a boy named Ty will battle creatures that make demons cringe in fear as he tries to fight for what is right.

In the third book of David Walker’s trilogy The Adventures of Cobasfang, Ty’s adventure begins outside the halls of Norgon City, where he finally sees Lord Drockmar’s massive Army and has to prepare for their inevitable attack. While racing to warn the people of his village who are gathering in the great Blue Fields to help end the war, Ty, Torg, and Normack will risk everything and travel through a dangerous and unexplored cave under the Crystal Mountain. When they finally arrive into the lush fields, Ty is shocked to find his mother, Marie, making the plans for battle and leading his village’s rag tag army.

But with no time left and the Royal Zintarian Guardians nowhere to be found, Marie leads the attack against Lord Drockmar’s army as they gush out of the caves of The Crystal Mountain. Outnumbered and fighting as hard as they can, the villagers were almost completely destroyed if it wasn’t for the help of the original Cobasfang, Lord of The Shadow Forest’s appearance ridding high on his dragon.

The tides of war began to turn in their favor as the dragon began decimating the Norgon’s advances and the Royal Zintarian Guardians finally arrived. That was when Ty stood face to face with Lord Drockmar and defeated him in an epic battle.

Realizing that Lord Drockmar would be tormented beyond belief, Ty, Torg, Normack and two other Royal Zintarian Guardians journeyed beyond The Shadow Forest to return the cursed black sapphire back to where Lord Drockmar got it so its energy could finally be destroyed. But this adventure would surely cost the lives of everyone there as they had to travel into the land of the forgotten and place the stone in the nest of the dragon Avare, for her unhatched offspring to feast on its energy.

But after battling through the ghouls protecting Avare’s lair and sneaking into her cave, Ty arrived too late as her offspring had already hatched just seconds before he got there. Then taking a risk and going for broke, Ty hung the stone around the hatchling’s neck and somehow opened an unbreakable link between himself and the newly born dragon Ty named Goobella.

Outraged at the invasion of her lair and the fact that Ty was the one who named her hatchling, Avare treated the hatchling as just another intruder and threw it out of her lair and scorched her lair clean.

Now with a baby dragon following Ty around like a puppy dog and no way to hide it from his family, Ty will have his hands full as he steps up to his newly chosen path in life. The path as the protector of The Shadow Forest.

This is the (Hard Cover) of David E Walker’s novel , enjoy.

Shipping not included in price shown.